Disc Golf Blog By a Beginner

The other week when I played in the Dynamic Discs  2 Disc Challenge, I wrote about how one hole destroyed my chances at any prize winnings. On the teepad, I was confident that I could at least par the now infamous hole. Alas, it was not to be, as the initial flight of the disc landed me in jail, big time.

Playing on my favorite course, Veteran’s Park Original, I felt confident that I could score better than I had at the previous year’s event. Playing the course at least once a month, I knew each hole well and felt good about all but a couple of holes that were tough for everybody. The hole before disaster struck is one of those holes, on which neither of my two cardmates scored well on.

With two guardian trees before the fairway opens up to a left and right option, I normally can throw a forehand down the left side and end up thirty to forty feet short of the basket. There is a center line of trees that can cause problems if you don’t throw straight enough.

I whipped up a picture to show you how horrible my drive on Hole 7 really was. It’s pretty self explanatory, but just so you’ll know, the line is the flight path of my disc. The circle at the bottom right is the previous hole’s basket, which is at least 15 feet lower in elevation from 7’s tee pad. 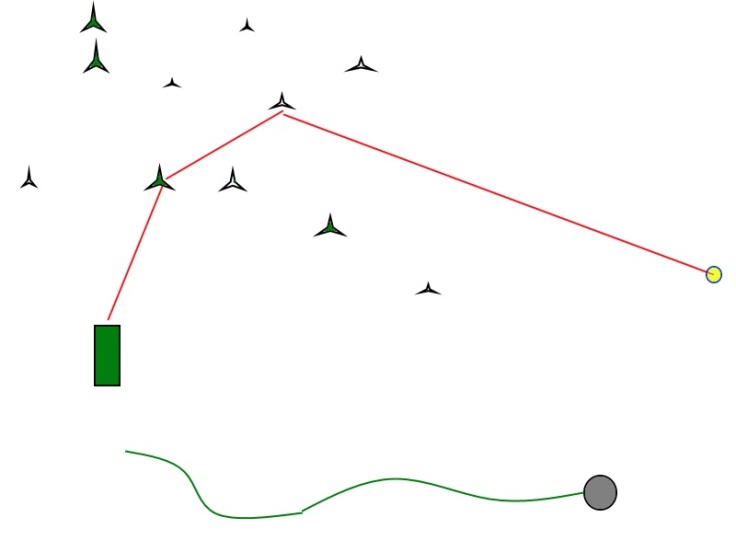 From the picture, you can see that I ended up well right of the basket and not very far in front. I was in jail something fierce. The brush is not terribly thick from where my disc was, but it was grown up enough that I had no clear path over top of everything. It was also close enough that I had no backhand or forehand path back to the fairway.

I opted for an overhand throw to try to clear the brush, but stay under the branches of the pine trees. The first throw from jail went thirty or forty feet, hit a branch, and nestled in the carpet of pine needles that covered the ground. The same happened for my second throw, while my third throw after my drive finally made it to the fairway.

For my fifth throw on the hole, I made it to within the circle for a putt. I can’t recall whether I hit the band or basket on my putt, though it doesn’t matter, as I took a 7 on the hole. Adding that to one bogey and two doubles already carded, I was seven over after seven holes. Not good.

Yeah, I had a bad front nine. The back nine was coming up, and I know those holes aren’t nearly as tough as a whole. On the holes eight and nine, my memory of hole 7 was pretty much gone. Taking a couple of pars, and using short memory allowed me to focus on each hole as a one hole course.

One bad hole didn’t define my day on the course. I was even able to nab a couple of birdies on the back nine. Albeit on short holes, a birdie is a birdie when looking at the scorecard. And the fact that I was limited to just two discs played a large factor.

Listening to the last Disc Golf Answer Man episode of the year, a question brought up the issue of having to many choices in your bag. Commenting on the 2 Disc Challenges that he had been to, Bobby Brown said he had heard many players say they had carded their best ever rounds during the Challenge. And those best scores come from your limit of discs to choose from in whatever situation you get yourself into.

With the limited choice of disc, it becomes hard to blame the disc for a bad throw. It’s only a disc. Just like any gun you might own, it can’t fire itself, and neither can a disc throw itself down the fairway into a tree and kick into trouble. Even if I had been carrying my full bag with ~20 discs, none of them could have told the others to head for a tree and see what happens.

Short memory, fewer molds, two discs. There are as many ways to temper a bad hole on an otherwise good round. Like Tim over at Mind Body Disc said in his latest Wisdom Wednesday post titled Simplify. It can greatly impact your life or disc golf game.

When you take things in stride and don’t blow up because your disc hit that Iron Leaf, you’ll walk to your car after the end of you round and say, what bad break?

One thought on “Bad Breaks Heal”

Panasonic has a few new cameras at #ces2020. I'd love to get this one, but it's just a wish list item atm. Idk how much more filming I have in me going forward. Crap camera, busy work and family life, and no means to get better equipment means my current project is likely my last solo gig I'll ever release. It's been a good run. I've enjoyed being around the great folks I've met in disc golf. Keep an eye out for 4 videos in a couple weeks. #lasthurrah #discgolf #discgolfmedia
Got a box of goodies yesterday. Glad to have these @uieverywhere NanoHD aps to deploy. Replacing various others at our offices so we'll be on one brand. #networking #accesspoints
I will be buying all my car parts from @rockauto_llc from now on. Best prices I've found so far. Quality parts. And you get these sweet magnets with cool cars on them. #notamechanic #replacingparts #cars
Just a little #unedited action here. @kbradyyyyyy had a unique putt and thought the best angle would be behind him. It reminded me of that Idlewild putt that Barsby told Jones he'd want to be in position to get the slo-mo shot. #discgolf #discgolfmedia #2019RWC