Disc Golf Blog By a Beginner 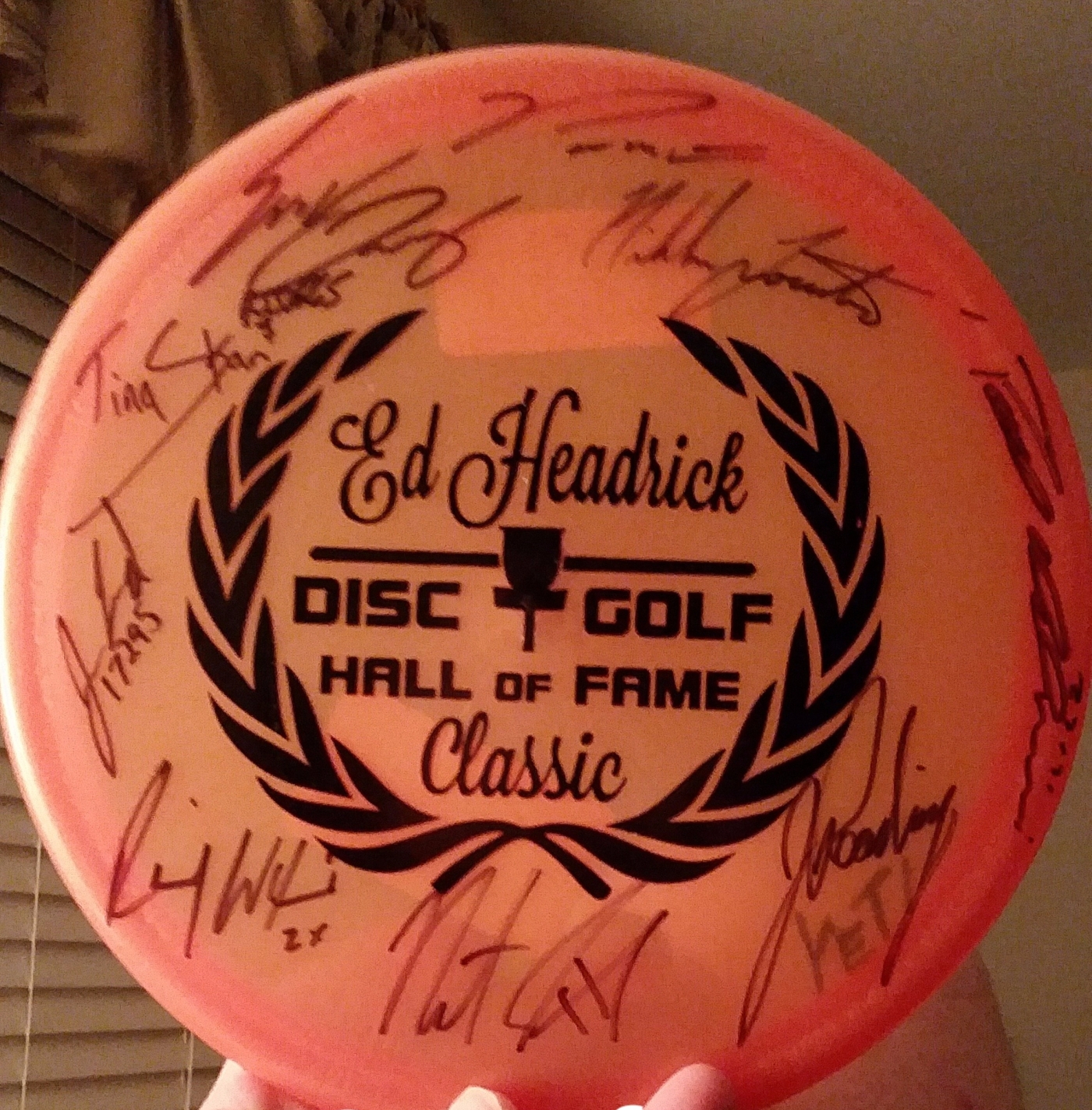 Coming down the stretch of a long season in any sport, there are certain days that elicit anybody feeling like an excited child about to open up a big box on Christmas morning. That last game to clinch a playoff berth in any of the big four sports. Finishing with a good enough payday to secure your PGA Tour card for the next year. Even the classic, bottom of the 9th inning, 2 outs, down 0-2 in the count, and smacking that game-winning RBI or home run.

So you’re there. You’ve finally made it to that big event. What’s the first thing you are going to do?

At the IDGC on Saturday of the HOF Classic, I arrived about 9:15 am, pulled out my camera backpack and walked in to check things out. When you think International Disc Golf Center, you sort of imagine a giant building with tons of display space, a healthy office section, and a museum section to marvel at. Well, it’s not so grand, which I mean in terms of size, not in greatness. The building is about the size of a 2000 square foot home, just judging by walking around the outside and seeing most of the inside. It might be a bit bigger or smaller, I don’t know, but, there is an amazing museum room chock full of history of disc sporting memorabilia.

Walking out back after perusing the Pro Shop, there is a putting area with at least 5-6 baskets. I won’t be firm on that because that level of detail wasn’t my top concern that morning. I whipped out my phone and commenced snapping photos of those who I’ve watched on video, follow on social media, and have read about aplenty. I filled up my Instagram story feed with these pictures for two days. I saved the ones I thought were the best. My favorite being a picture while waiting during a backup on 14 at W.R. Jackson.

I took quite a few photos. Some I saved, some I didn’t, though it matters little since I have great memories of being at the 2017 National Tour Finale.

I had not planned on bringing anything home from the tournament other than some memorable footage and any new knowledge picked up from the other crews there to film the action. Walking through the Pro Shop at the IDGC, there was a lot of plastic in a really small space. If it is in production, they likely had it in that room. Nothing jumped out at me while I was browsing the offerings laid out on the racks until I saw the HOF Classic stamped discs. There were a few models of Innova discs on the racks. I remember seeing some Aviar3s and I think another Aviar model.

What stood out were the Flat Top Luster Champion Gators. Several bright green discs were on the front of the rack, which is what initially caught my eye. Behind them, though, were some fairly bright orange ones. I waffled a bit before deciding on the orange one. Orange is just my favorite color for discs, so I had to go with it. 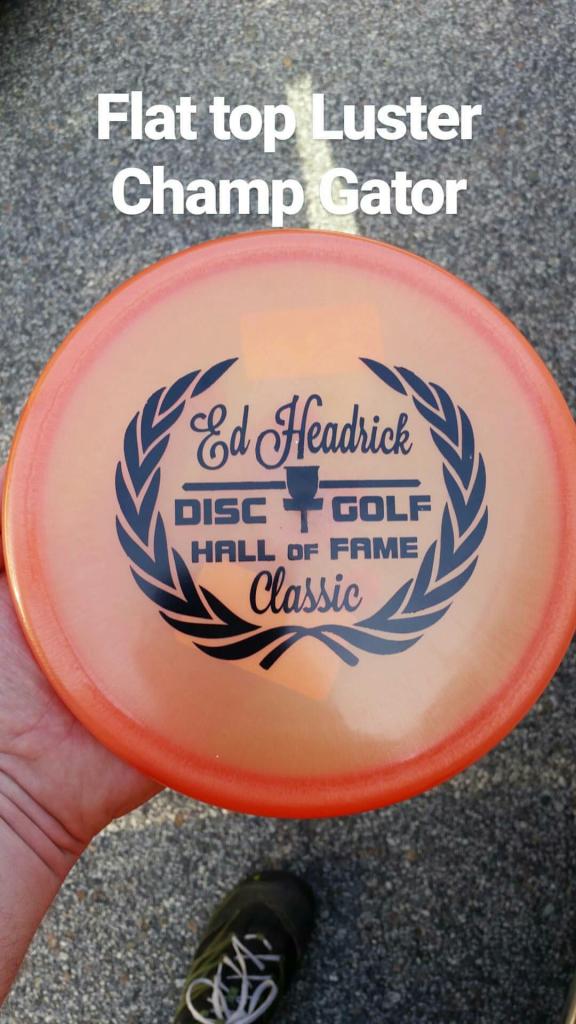 3. A Little Something For Yourself

The tourney stamped disc is nice, but that’s a souvenir. Something you want to preserve as that forever reminder of your time at the event or location. You also need a little something for yourself. At the HOF Classic, there were several vendors selling their various wares. The WhalePants tour was there selling their tour fundraiser discs along with Tina’s WhaleSacs. The Innova RV was there peddling tour series discs like the Sexton Firebird. Cam Todd had a tent set up with his artwork. I looked around at each to see if anything caught my eye.

The Innova table had a box full of the 2017 Sexton Firebirds. They all looked super awesome, and I ended up getting one for myself. For the longest time, I haven’t been one to rush out and try to get one of the new tour series discs. While I haven’t gotten on the bandwagon just yet, if the Sexton Firebird I bought flies as well as it feels in my hand, I might just hop on. 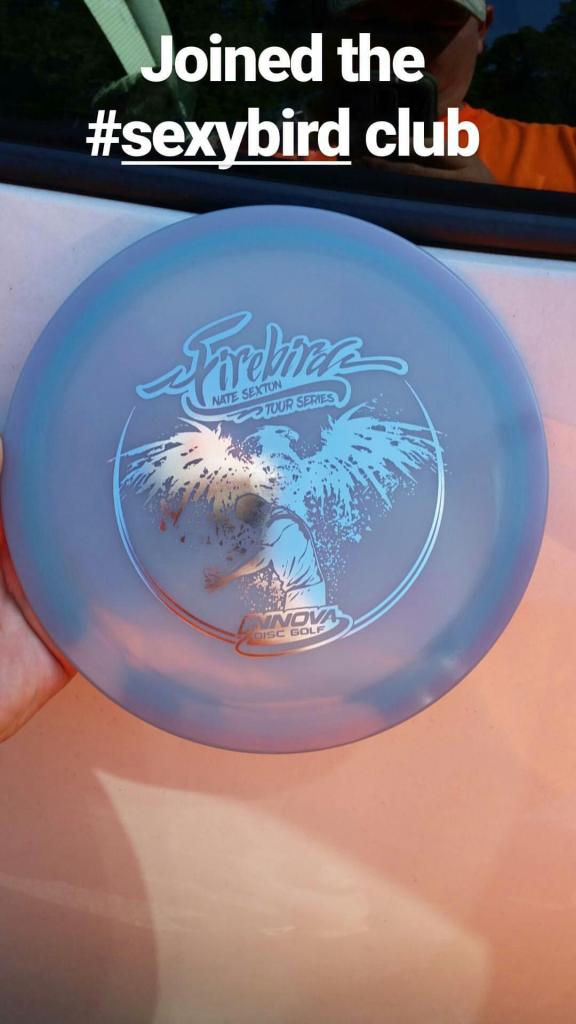 Since I was there primarily to film, shaking hands and asking for a signature on a disc was not a priority. However, I had one person in my sights to meet as he was there playing on the A-tier side in the Masters. That was Jay “Yeti” Reading. After the Hall of Fame induction ceremony was through Saturday night, I approached and introduced myself quickly. A short few words were said and I moved on as they were taking pictures of the Hall of Fame members in attendance under the pavilion’s cover. I later got him to sign my HOF disc on Sunday as the crowd there waited on the MPO division to finish play.

I also shook the hand of Philo Brathwaite on Saturday after his round. He is as tall and lanky as you imagine, and a cool dude to boot. It was short and sweet as well, and I moved on. I introduced myself to Marty Gregwah on Saturday as well. I spoke with Hannah Croake before Paul McBeth’s Saturday round, which I filmed (more on that at a later date). As any country boy would say, Gosh, she’s pretty. Being the unknown guy there, I kept to myself for the most part.

It was really nice to finally meet Terry Miller and Jonathan Gomez in person. Two stalwarts in the media side of our sport, I got to learn a few things from Terry while I was there. The Jomez crew was always on the go and busy as heck. I spent a few minutes watching one of the Follow Flight clips being produced by Michael. He was in the zone working on it, and I didn’t bother him as I checked out the detail in which he made sure that tracker line was right there on the disc the whole time.

After I was done filming on Sunday, I grabbed my HOF disc and got a few signatures added to it. All of the signing was done after rounds were finished, and in the case of Paul McBeth and Ricky Wysocki, after their playoff had finished and they were relaxing before the awards were given out. There were several personalities I would have liked to have gotten a signature from, but as previously stated, I wasn’t out to hound anybody at all.

What’s better than a close tournament where the winner squeaks out a 1-2 stroke victory? When there’s a playoff to win the tournament!

Inside the IDGC, they had a large TV with the live scoring open on the screen. I was sitting at the table in the main lobby rendering out some footage from Saturday and walking around some as it took an hour or so to render. McBeth finished and had to wait to see what the lead and chase cards would do. Once the announcement that there was a three-way playoff was made, it became slightly chaotic as PDGA staff ran around, players gathered and talked, and spectators made their way to Hole 1.

I was late in getting to Hole 1 to see the action. I had also already packed up my camera for the day, and only had my phone with me. After they teed off on Hole 1, I started pushing my way to the front of the crowd so I could get some footage on my phone. Terry, Marty McGee, and the Jomez crew were already on hand to capture the playoff, so I felt no qualms about leaving my camera behind. By the time they were at the green of Hole 1, I had made it to the front where I could capture the action on my phone.

You’ve seen the footage from Jomez already, and I’ll post it below as well. Seeing these guys throw when a big paycheck is on the line is almost unreal. The pressure they are feeling from the expectations they themselves have, their sponsors, family, media and the crowd is palpable. Ricky Wysocki was the furthest out on the first playoff hole and nailed it. He was almost twice as far away as McBeth was on the second hole and nailed it. On the third hole, he was only 15 or so feet away.

McBeth was no slouch either. He was well inside his wheelhouse on hole 1 when he kept pace with Wysocki for the birdie. Once he threw on the second playoff hole, he ended up being the closest to the pin. When he matched birdies with Wysocki again, they were off to hole 3, the shortest hole of the playoff. His tee shot leaked left and scooted along the hard packed ground past the basket. His normal putting routine was in place, no need for the straddle, but right out of his hand he exclaimed “Oh, no!” Knowing that it wasn’t his best putt, we all watched as it splashed left side chains and fell to the dirt.

Wysocki took that missed putt and pounced on his opportunity to win the tournament. Whether or not he thought he had a shot at the NT points title once they were in the playoff, I’ll never know. Ricky was pumped thoroughly to take down McBeth though, and they met each other after that final putt with a handshake full of respect.

I don’t know of any other way that would’ve made being at the Hall of Fame Classic any better. My videos above just show you what it was like to be there in person. Check out the Jomez footage of the playoff below. If you ever have a chance to be at an NT, DGPT, or Major event, don’t miss out. It’ll be something to remember for a long time.

One thought on “5 Essential Things For An Epic NT Experience”